Afghan Allies of the United States 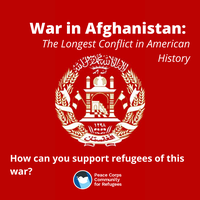 The War in Afghanistan began in 2001 after the September 11 attacks and has lasted for more than 19 years, making it the longest conflict in which the United States has been involved.   As the United States military forces prepare to leave in summer 2021, particular concerns for the safety and security of Afghan allies in-country arise.  The following resources provide guidance and support for refugees of this war.

How to apply for SIV approvals
Afghan SIV Guidelines and DS157 Instructions (state.gov)