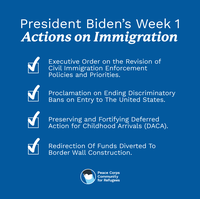 President Joe Biden has taken swift action to begin a restoration of support for refugees and asylum seekers entering the United States.  Four specific executive actions signed in his first full week in office illustrate the administrative resolve.  As we anticipate a return to 125,000 annual immigration totals, we also recognize the challenges facing resettlement agencies which, for the past four years, have seen substantial funding cuts.

Executive Order on the Revision of Civil Immigration Enforcement Policies and Priorities: Revokes an executive order issued by former President Trump, which made sanctuary jurisdictions that did not comply with immigration enforcement measures ineligible to receive federal funding.
Issued: Jan. 20

Preserving and Fortifying Deferred Action for Childhood Arrivals (DACA): Directs the Department of Homeland Security to strengthen the regulation, which defers the removal of certain undocumented immigrants who were brought to the U.S. as children.
Issued: Jan. 20

Proclamation on the Termination Of Emergency With Respect To The Southern Border Of The United States And Redirection Of Funds Diverted To Border Wall Construction: Halts construction and funding of the border wall.
Issued: Jan. 20

Executive Order on Ensuring a Lawful and Accurate Enumeration and Apportionment Pursuant to the Decennial Census:  Guarantees that all of the Nation’s inhabitants have representation in the House of Representatives.

In addition to these executive actions, the Biden administration has committed to implement a wide range of immigration policies that include ending the Migrant Protection Protocols (“Remain in Mexico” policy); provide a roadmap to citizenship for nearly 11 million unauthorized immigrants; preserve diversity preferences to allow immigrants from underrepresented countries; and, tackle the root causes of migration that are compelling people to flee their homes in Central America.

President Biden has signed three executive orders on Tuesday, February 2, aimed at further rolling back his predecessor’s assault on immigration and at reuniting migrant children who were separated from their families at the Mexican border.

In one order, the president directed the Secretary of Homeland Security to lead a task force to try to unite several hundred families that remain separated under Donald J. Trump’s “zero tolerance” policy, which sought to discourage migration across the country’s southern border.

With two other orders, Mr. Biden authorized a review of Mr. Trump’s immigration policies that limited asylum, stopped funding to foreign countries, made it more difficult to get green cards or be naturalized, and slowed legal immigration into the United States.

The Biden Plan for Securing Our Values as a Nation of Immigrants https://joebiden.com/immigration/.