Protection for Asylum Seekers in Jeopardy 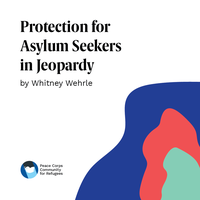 The Departments of Justice and Homeland Security recently proposed a set of new regulations that would further complicate the asylum process for those seeking protection in the United States. Importantly, these are not mandated and action can still be taken to halt and alter the proposals.

The Departments published a proposal on June 15, 2020 with a 30-day public comment period that ended July 15, 2020. The proposed changes to restrict asylum claims and eligibility, following the comment and amendment periods, could take effect as early as mid-October. The legislation would impact an individual’s eligibility for asylum and how cases are decided. You can read more about the steps and see where the Departments are currently in the rulemaking process here.

The proposed changes would also enhance scrutiny of asylum claims. Particularly noteworthy for asylum seekers originating in Central and South America, the proposed changes would challenge an asylee’s claim if the individual had traveled through other countries, but did not seek asylum there, prior to reaching the US. Other proposed aspects that could disqualify an individual’s asylum claim are criminal records, even those dismissed or expunged, and a failure to file taxes.

This proposal also seeks to limit the definition of persecution by eliminating previously accepted claims. Under the new proposal, an individual’s gender and fear of gender-based violence would no longer qualify an asylum claim. Furthermore, the individual would now be required to prove they were unable to relocate themselves internally prior to seeking asylum in the US; a current responsibility of the US government.

Additional changes would enable judges to deny applicants without holding a hearing.

Critics suggest the proposal seeks to make asylum impossible and would further limit those who qualify.

Although this proposal’s comment period has already ended, an additional proposed rule was published on July 9, 2020 with a 30-day public comment period set to end August 10, 2020. The Departments seek to prohibit entry of asylum seekers who originate from or pass through countries riddled with the novel COVID-19 virus. Although proposed under current public health concerns, this rule would also include other diseases as designated by the US government.

According to D.C. area nonprofit, AsylumWorks, it is important for the public to engage during the comment period, regardless of legal familiarity or experience. The organization states that comments from the public will form a legal record and support reform of the proposal. You can read the current proposal and submit a formal comment here before August 10, 2020.