Refugee Resettlement: Positive Momentum and Next Steps for Advocacy 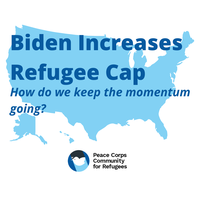 The Peace Corps Community for Refugees, with representation across the United States, was part of this effort However much remains to be done in the months and years ahead.

Befitting from a nation of migrants and refugees, the United States once had the world’s premiere refugee resettlement program. Building back will take a long time and require extensive support from community groups and individuals. It will also take sustained engagement with elected officials at national, state, and municipal levels given the inevitable political and budgetary pressures in the years ahead.

In response to push-back from a wide range of stakeholders, the refugee cap for this fiscal year was indeed raised to 62,500.  This is a serious step toward rebuilding the resettlement program.  It includes government at national, state, and municipal levels.  It includes civil society.  It includes concerned individuals.  It includes us.

What can you do?

First, take a look at this useful blog which notes the importance of raising the cap for the next fiscal year to 125,000.  It will be useful for shaping your messaging with elected officials. Tip: Mention your support of the Grace Act which is gaining traction at the national level.

Fourth, don’t forget that the asylum process is separate from the U.S refugee resettlement program. There are likely to be asylum seekers and other vulnerable migrants in your communities who need support as well.  In the months ahead we will showcase different individuals and organisations assisting them around the country.

The Peace Corps Community for Refugees will keep you updated on ways that you can stay involved as the U.S refugee resettlement program rebuilds.  Don’t hesitate to contact us with your ideas and suggestions.