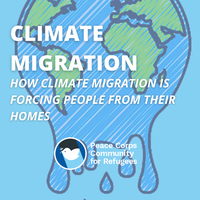 RPCV Voices is a blog series on the Peace Corps Community for Refugees website. The purpose is to allow returned Peace Corps Volunteers the opportunity to share their experience as refugees, work with refugee communities, or opinions about the refugee crisis. If you have a story to share, please email info@pcc4refugees.org

It is difficult to quantify the number of individuals who are forced to leave their homes due to environmental and/or climate changes.  Many of the areas most susceptible to natural disasters are also facing political disturbances and violence. One important distinction is that climate migrants are not considered refugees and do not have the same status.

There are several reasons that the word migrant is used in place of refugee, it is said that because climate changes occur slowly over time, the solution should be management of individuals and their movements instead of providing protection as is the case with refugees seeking asylum. This idea of managing how a country creates policies and systems to support individuals who must relocate comes down to creating strong human-rights guidelines and pathways for simplified migration. There is a lot of merit behind this idea, but creating and funding programs and infrastructure to support resettlement of huge groups of people is a difficult task for countries that are facing a myriad of other issues.

The effects of climate change can be seen world-wide. The Republic of Kiribati (a chain of 32 coral atolls, 21 of which are inhabited, in the South Pacific) which is thought to be one of the most vulnerable nations to the effects of climate change is facing rapid annual sea level rise amongst other factors that will likely render the islands uninhabitable one day in the not too far future.

Many individuals in Central America and the Caribbean are forced to uproot their homes as their hurricane season intensifies and more communities are being decimated. People all over the world rely on subsistence farming to feed their families and if there is no longer water or conversely if the land goes underwater then these individuals will leave their homes to search for a place that allows them to grow their food or merely to live in a home that is not submerged. After hurricanes Eta and Iota struck Honduras and other nearby countries in 2020, the “Ministry of Agriculture and Livestock reported losses of up to 80% in the agricultural sector” (reliefweb.int) which eliminated the food that many families relied on for sustenance and their livelihoods.

The intensified warming of the planet from human related activity is causing significant environmental pattern changes. These changes are not affecting all regions of the planet evenly, but are becoming more and more apparent to humans everywhere. In the United States, the impacts of climate change are evident from the wildfires in California to the significant increase in snow and rainfall in the Northeastern United States within the last half century.

Some cities in the United States, and perhaps elsewhere as well, are being proposed as future sanctuary cities for climate migrants. These cities include Duluth, MN, Buffalo, NY, Cincinnati, OH and others in the north of the United States. Some of these cities are beginning to market themselves as sanctuaries that have the space and infrastructure to welcome new residents and climates that will keep the area liveable for much longer than other cities. Buffalo, NY is listed amongst the snowiest cities in the United States and is located close to many lakes which leads many scientists to believe that it will remain one of the safest cities as climate change intensifies. In fact, Buffalo “has already welcomed some who might be described as climate migrants, providing shelter to thousands of Puerto Ricans after Hurricane Maria devastated the island in Fall 2017.” (yaleclimateconnections.org).

As ocean levels, temperatures, precipitation, and other climate factors are drastically changing across the planet, it is essential that policies are created that align with the evolving migration patterns. While climate migrants may not be facing deadly persecution as many other asylum seekers, it is crucial that governing bodies work to support individuals who are fleeing from the fatalities that environmental destruction brings.