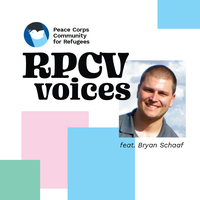 RPCV Voices is a blog series on the Peace Corps Community for Refugees website.
The purpose is to allow returned Peace Corps Volunteers the opportunity to share their
experience as refugees, work with refugee communities, or opinions about the refugee
crisis. If you have a story to share, please email morganking296@gmail.com.

The United States has always been a nation of migrants and refugees. If indeed we are an
exceptional country, it is our diversity and willingness to embrace it that makes us so great.
The United States once oversaw the largest and most successful refugee resettlement
program in the world. Since 1975, the United States has resettled more than 3.3 million
refugees. In some cases, these were populations for which the United States bore a special
responsibility, such as the Vietnamese, Iraqi, and Afghan refugees. As a colleague who
resettles refugees told me: “If you can’t protect the most vulnerable where they are then
you take them to where they are safe.”

The Trump Administration has, by design, reduced the refugee resettlement program to a
shadow of its former self. It remains to be seen whether the program can be rebuilt under
the Biden administration. Doing so will take years but would signal our commitment to
support refugees around the world.

We should think of resettlement as solidarity and not charity. Nobody is immune from
conflict or natural disasters. Any of us would want our family members to be helped and
treated with dignity in similar circumstances. Moral arguments aside, refugees resettled to
the United States have an opportunity to re-start their lives and, time after time, have given
back tremendously to their communities. Many are creative, resilient and entrepreneurial –
qualities necessary for survival in difficult conditions. Resettled refugees have started small
businesses, hired employees, opened stores and restaurants in your neighborhood.
The impact of immigrants and refugees in the United States also has more obvious
examples, including: Albert Einstein, Madeleine Albright, Henry Kissinger, the inventor of
WhatsApp, a co-founder of Google, and more. Refugees have been and remain an essential
part of the social and economic fabric of this country.

It will take a long time to restore the refugee resettlement program. Doing so in the context
of the COVID-19 pandemic will be especially challenging. Part of what historically made the
U.S refugee resettlement program so successful was the emphasis on expediency,
compared to other resettlement countries which emphasize learning the language and
working to “earn” entry. The United States always supported refugees finding employment
and stability as soon as possible with the goal of making refugees self-reliant and integrated.
The Trump Administration has shown how quickly decades of work can be dismantled. Now
is the time to consider innovative reforms. One approach, which has worked well in other
countries, is a private sponsorship model that involves public participation. In other words,
individuals and organisations can assume the costs and responsibilities of receiving and

integrating a refugee or refugee family. This approach empowers private individuals and
groups to commit time and resources towards resettling and integrating refugees. It is a
concrete response for Americans who ask “What can I do to help?” Even if a future
administration steps back from refugee resettlement, civil society can step up.
Through their knowledge of other languages, cultures, and empathy towards the challenges
of integration, Returned Peace Corps Volunteers can be leaders in promoting the
resettlement and integration of refugees in their communities.

In short, refugees are part of what makes the United States great. If you agree, then it is
time to let your elected officials know. If we remain committed, RPCVs can help grow and
improve the refugee resettlement program through advocacy and direct involvement.