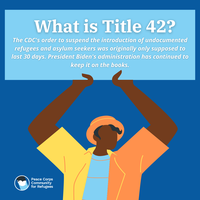 Avid readers of the news related to immigration and refugee issues in the United States have likely seen headlines about a controversial order from the Center for Disease Control (CDC), referred to as Title 42. Between the various opinions and sources it can be hard to parse out what Title 42 actually means. As calls to end enforcement of this order grow, it is essential that advocates for refugees and asylum seekers understand what people are talking about when they refer to Title 42.

In March of 2020, the CDC issued an order that effectively closed the borders of the United States to those who would be placed in a “congregate setting” pursuant to a decades old law called the Public Health Services Act of 1944. The purpose of the original law was to give the Surgeon General, rather than the President, authority over matters relating to quarantine needs. The 2020 order, issued by the Trump Administration CDC Director Robert Redfield, states:

“...I hereby suspend the introduction of all covered aliens into the United States until I determine that the danger of further introduction of COVID-19 into the United States has ceased to be a serious danger to the public health, and continuation of the Order is no longer necessary to protect the public health. [...] This order applies to persons traveling from Canada or Mexico (regardless of their country of origin) who would otherwise be introduced into a congregate setting in a land or coastal Point of Entry (POE) or Border Patrol station at or near the United States borders with Canada or Mexico, subject to the exceptions detailed below.”

In the order, Redfield argues that the measure is necessary due to the risk of transmission of the virus during processing at POEs and Customs and Border Patrol stations, as well as the risk of the COVID-19 virus spreading to the interior of the country. He also writes that this situation would put increased strain on the United States’ healthcare system and “reduce the availability of such resources to the domestic population.”

The order goes on to assert that exceptions could be made on a case-by-case basis and clarifies that the people most affected by the order will be people seeking to enter the country who do not have “proper travel documents, aliens whose entry is otherwise contrary to law, and aliens who are apprehended near the border seeking to unlawfully enter the United States between POEs.”

The order to suspend the introduction of all such foreign nationals was originally only supposed to last 30 days but included the provision that it could be continued “if necessary, to protect the public health.” Despite President Biden’s campaign promises of restoring the rights of asylum seekers, his administration has continued to keep Title 42 on the books as of April 2021, over a year after the CDC issued the order.

For the lives of those expelled from the country due to Title 42, the effects are devastating. The Intercept reports that there have been over 637,000 expulsions under the order in the past year, including 13,000 unaccompanied children, though a federal court blocked the administration of the law to children in November of 2020.

The process to expel someone under Title 42 does not require a hearing and can take less than two hours. Many migrants who are not Mexican nor speak Spanish have been sent to Mexico, where they face challenges in finding work, housing, and social services due to the language barrier and lack of a support network. Furthermore, the order has created virtually insurmountable barriers to people looking to apply for asylum. This has forced people fleeing desperate situations to attempt dangerous methods to cross the border that leave them vulnerable to violence and other violations of their human rights.

Public health officials have spoken out against the order claiming that it does not actually achieve its purported goal of protecting people from the spread of COVID-19. An article from the Associated Press reported that health officials actually refused to issue the March 2020 order until Mike Pence called Redfield and instructed him to go through with it anyway.

In May 2020, a group of public health experts came together to call on the CDC to lift the order, arguing that not only is the order discriminatory against certain groups of migrants, but it is also ineffective at stopping virus transmission, as hundreds of thousands of people still cross the border daily.

Instead of expelling the vulnerable groups targeted by the law, these experts recommended that the government should instead implement evidence-based best practices, including providing preventative methods like masks, testing, and ways to practice social distancing while still processing asylum applications.

The Biden administration has faced increased pressure and criticism from many on the left who say that they have not done enough to overturn the Trump administration’s anti-immigration and refugee policies. President Biden announced in March 2021 that Vice President Kamala Harris will take on the challenge of stemming migration at the southern border.

Calls to end expulsions due to Title 42 have been gaining traction, but it remains to be seen what this administration will do to protect what Biden previously called “the dignity of migrants” and their “legal right to seek asylum” during his campaign.