How the Peace Corps Community is Responding

The Peace Corps Community is supporting refugees, asylees, and asylum seekers! Please read more to see the activities and discover ideas to support.
Want more information on an activity below? We're happy to connect you! Please email info@pcc4refugees.org.

The Multi Cultural Event Welcoming Refugees to Jacksonville was started with an 11:00 am Mass, followed by a Celebration, complete with a  Food Tasting from around the world and very lively singing, dancing and celebration. 10 members of First Coast RPCVs prepared the cookies packages. This was FCRPCV, Inc's first major effort to assist in the refugee crisis. They have also raised approximately $900 which was donated to support this event. 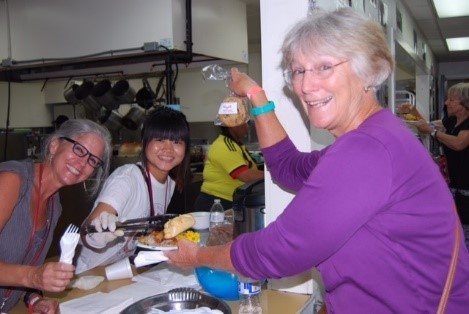 Two RPCVs co-organized an advocacy event in Durham, NC in August to bring people together around the theme of Reuniting Families in support for refugees and immigrants. It was organized by a new coalition, Triangle Interfaith Advocates for Refugees and Immigrants (TIARI).

It was very successful, with over 100 attendees who heard first-hand stories from refugees and immigrants, and then wrote over 100 postcards to their representatives. They wrote a short blog post that describes the event.

They are encouraging other groups to host similar events and are happy to share information to help! Please email info@pcc4refugees.orgindicating your interest, and we can connect you!

In 2017, CARV raised over $7000 from 121 individuals to help Sponsor a family from Syria https://www.gofundme.com/from-syria-to-cincinnati

The Osman family came to Cincinnati a little over a year ago seeking refuge from the Syrian Civil War, which has claimed the lives of nearly a half a million by some estimates. Since arriving, the Osmans have started learning English, experienced American culture, shared their own culture, and touched the lives of many. Recently, the family of seven welcomed their newest addition, a healthy baby boy. Now, they will no longer have the airfare debt nor medical expenses holding them back. There was even a little money left over to put towards their rent. They are eternally grateful.

CARV members have also been active for the past year assisting Catholic Charities in Refugee Resettlement. Over 30 members have contributed directly to making these new Americans welcome in our community. Activities include:
-  sorting and transporting household items from the warehouse to the families' new homes
-  teaching English once a week to a class
-  transporting refugees to their initial doctor appointments
-  gardening with Bhutanese farmers at Gorman Heritage Farm
-  assisting with World Refugee Day festivities

In addition, they mentored a Syrian family of six. They introduced them to pumpkin carving, had an outing to Smale Park on the riverfront, shared Thanksgiving dinner, tutored the children, worked on ESL with the parents, tookthem to the doctor and FOUND A JOB for the dad, Bassam, in his chosen field - shoemaking, etc. Our objective is to help them navigate their new community and become independent.

Stay up to date on refugee issues.

RPCV Voices: Refugee Resettlement in the Post Trump Era
January 20, 2021
The United States has always been a nation of migrants and refugees. Read More 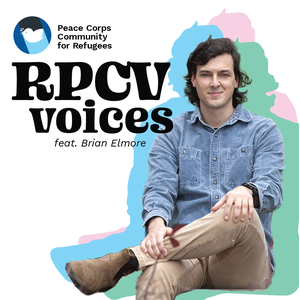 RPCV Voices: Medical University of South Carolina Asylum Clinic
December 20, 2020
The American South is a blackhole for asylum-seekers. The immigration courts that will decide Read More 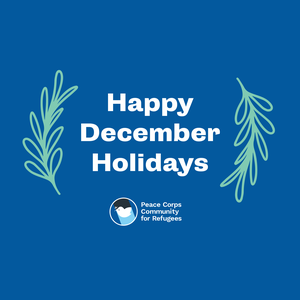 PCC4Refugees Shopping Guide
December 16, 2020
The December gift giving season is upon us. It is important to reflect upon the impact of those purc Read More 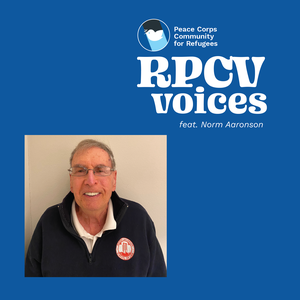 They provided a $500.00 grant for refugee resettlement to Orchard Park Educational Outreach (OPEO) which is a high school service organization that has supported local and international assistance projects for more than two decades. The OPEO team of 20 students, their advisers, along with a few supportive parents and six RPCVs and spouses, used the support grant to repair and furnish, provision and refurbish a large apartment on Grant St. in Buffalo’s vibrant and rejuvenated West Side.

The project, which was started and finished on Saturday May 13th, established a home for a Yazidi refugee family of seven from Northern Iraq whom we are assisting through the Journey’s End program. The Yazidi ethnic group has been besieged by the Islamic State (ISIS) because of their unorthodox cultural belief system that honors and respects Islam, Zoroastrianism and Christianity. The Islamic State (ISIS) targeted this ethnic group, enslaved Yazidi women and engaged in genocide against Yazidi men and boys.

In 2017, the Buffalo RPCVs hosted their annual Thanksgiving Dinner for refugees, migrants and asylees at the Vive' Refugee Center. Plus our student partner group used part of our joint Friends of Afghanistan ($1000) and RPCV/Buffalo ($500) grants to place another refugee family in the spring. 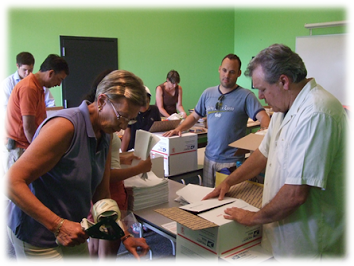 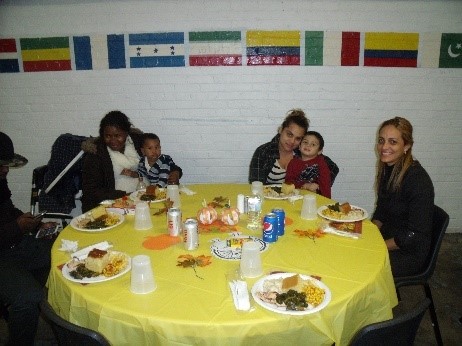 The LIRS affiliate in northern Virginia, LSS, gave a presentation about refugee resettlement and volunteer opportunities with NOVA. Then, they partnered with Rotary International and held a Refugee Welcome Kits Packing Party (pilot project on July 22, 2017). They successfully collected necessary items and packed 48 Welcome Kits: 24 Cleaning Kits and 24 Toiletry Kits for LSS to give to their refugee families. 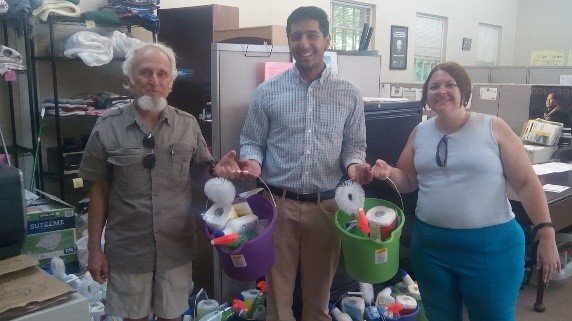 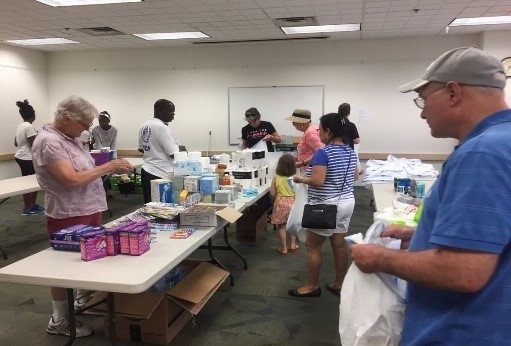 RPCV-Madison gave over $6,100 to Open Doors for Refugees from its benefit 5/10 K walk / run, named Freeze for Food, held in February 2017.  It has asked Open Doors to use the monies toward food sustainability (gardens, groceries, nutrition), for newly arrived refugee families, as well as for families who have been here a short number of years.

They are also organizing a number of "teams" to assist with ESL support, child care, transportation, employment, translation, and donations and pick-ups of furniture and apartment set ups.

The Iowa PCA organized an international dinner with dishes provided by local restaurants and groups.  Following the dinner, Dr. Anne Kinche will spoke on the evening’s theme “Refugee Women and their Families:  Educating a General of Rerfugee Girls and Boys.”  Dr. Kinche, originally from Kenya, presented personal perspectives on the educational needs and aspirations of refugees based on her research in Kenya and her work in the refugee community in Johnson County, Iowa.

The Norcal group organized a “Refugee 101 with the IRC” where IRC staff gave a presentation on the lifecycle of a refugee from fleeing their home country to gaining refugee status to resettlement in the U.S. They gave an overview of the demographics of refugees who are resettling in the Bay Area and what programs are in effect in the local Northern California offices. They also covered how the executive order has impacted resettlement agencies across the country and what to expect for the next half of the fiscal year. Finally, they provided ways to get involved to support refugees in the Bay Area.
http://www.norcalpca.org/events/refugee-101-with-the-international-rescue-committee

On January 9, 2018 NorCal is organizing a panel event at the Commonwealth Club in San Francisco, CA. Karen Ferguson, Executive Director for Northern California Offices at IRC, will be featured on a panel with Valerie Kurka and facilitated by Kristen Borash, NorCal board member. https://www.commonwealthclub.org/events/2018-01-09/harm-home-refugees-journey-bay

The Maine Peace Corps Association collaborated with the World Affairs Council of Maine to show the Jon Stewart-produced feature documentary film After Spring on Syrian refugees in Jordan at the University of Southern Maine (USM) in Portland, Maine on June 15, 2017.

Hosted a Panel in 2016 titled The Refugee Experience in Austin at the School of Social Work Building at the University of Texas - Austin. This panel discussion, led by community service providers and university academics, discussed refugee and asylees experiences within the greater Austin area and what further social justice actions can be done in the future.
http://www.hotpca.org/2016/03/panel-the-refugee-experience-in-austin

In September 2016 The sponsored a migrant/refugee family from China. “After leaving the airport, we took our family to Shen Zhen restaurant on 82nd for dinner.  Through the interpreter Ping we learned they are from Heilongjiang Province in northern China.  After dinner we took them to stay at a nearby motel and showed them how to use the laundry.  They will be at the motel for a couple days, then hopefully stay with Chinese community contacts until their apartment is ready next week.  The apartment is in Gresham close to the Portland boundary.”

On May 14, 2016 they teamed up with First Hand: Refugee Talks & Wikimedia DC for a Wikipedia edit-a-thon on refugee issues. They heard first-hand accounts from refugees and edited Wikipedia pages on refugee topics.  http://www.rpcvw.org/refugees_wikipedia_edit

Hosted a Panel in 2016 titled Fleeing Conflict and Poverty: Refugees Seek a New Life at the University of the Pacific. Joining them is Jessica Therkelsen who spoke on the plight of refugees fleeing conflict, the difficulties they face accessing basic human rights and the rampant use of unjust detention and Torin Jones, who told the stories of the African refugees he met during his research in refugee camps in Sicily, Italy. Moderating the conversation was Professor and Associate Dean for Scholarship at McGeorge Law School, Raquel Aldana.