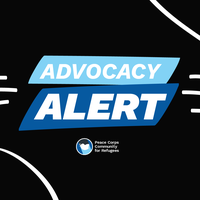 The Peace Corps Community for Refugees joins other refugee support organizations in calling upon the Biden Administration to significantly raise the refugee admissions goal for Fiscal Year 2021. We strongly encourage President Biden to sign a Presidential Determination (PD) that reflects our country’s humanitarian values and reestablishes the U.S. as a leader in welcoming the world’s most vulnerable people.

Earlier this year, the President stated his intent to set the refugee cap at 62,500. On April 16th, he signed a PD limiting that number to 15,000, the same as under the Trump Administration. At a time when we are seeing record numbers of refugees around the world, the U.S. is on track this year to resettle the lowest number in our history (just over 2,000 admitted thus far).

Following an outcry from refugee resettlement organizations, members of Congress and other refugee advocates, the Biden administration is reassessing the 15,000 limit and will announce a new PD by May 15, 2021. Now is the time to ask the White House to raise this year’s goal to 62,500 and also keep its commitment to set the FY 2022 cap at 125,000. There are currently more than 35,000 refugees who have already been vetted and cleared for entry to the United States, with about another 100,000 at various stages in the pipeline.

It’s important to note that the program for admitting refugees is distinct from the system for asylum seekers. Refugees are people who have been vetted while still overseas, passed rigorous security checks and have met the requirements for refugee status in the U.S.

Those seeking their legal rights to asylum, such as the migrants currently arriving at our southern border, have not gone through this rigorous process to achieve refugee status. While we look forward to more comprehensive immigration reform that will better address the needs of all those seeking entry to our country, it is critical that we do not conflate these two situations in the meantime.

Refugee resettlement organizations in the U.S. are confident they can handle a far higher number than proposed by this administration and are among the most vocal in calling for an increase in the PD. Once a world leader in welcoming refugees, we now rank far behind such countries as Jordan, Turkey, Colombia, Lebanon and Bangladesh. 85% of refugees worldwide are being hosted by developing countries.

We have both the resources and the moral obligation to do so much more for those fleeing for their lives. As refugees have immeasurably enriched our society through their contributions, it is also in our own interest to welcome their arrival.