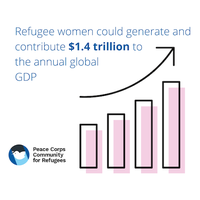 Border Stories is a blog series which profiles refugees and migrants along the US-Mexico border. The series aims to share and humanize the experience of vulnerable populations seeking asylum in the United States. Names and key information have been changed to protect privacy. If you have an idea for a story, please email info@pcc4refugees.org

For the last seven months, Charity has lived and worked with a community of refugees along the U.S.-Mexico border. The majority of the people she serves, are awaiting their asylum cases in the United States.

Melony was my first mother. Meaning, she was the first mother I was tasked with looking after. My first night at the shelter was her second. She had just given birth to the tiniest, little boy. He was a premi, and had not yet grown into his skin. That first night was long. We both found ourselves in a large dorm room at a shelter in a bordertown in Mexico, sleeping in a row of bunk beds with seven other women. Her newborn began crying around 11p.m. In the dark, I listened as she struggled to quiet his cries. They lingered in the otherwise painfully quiet room.

I could feel her thoughts, knowing every eye in that dark room was awake, watching as she struggled to soothe the child. I could feel how desperately she craved the comfort of silence. I kicked off my sheet and shuffled across the dorm. Kneeling down next to her bed, I stroked her head. There was the obvious uncomfortableness of having only just met each other that day. As well as only being four years apart in age, as she was 20 and I, 24. But, I felt the need to comfort her and provide some sort of support.

I sat on the floor in the dark, silently rubbing her feet as she wrestled through the frustration and exhaustion of trying to get her son to latch. We remained like this for a long time. There in the dark, silence of the 3a.m. hour. The late hour of the night and the vulnerability we both felt intertwined, and would become the root of one of the strongest bonds I've ever shared with another human being.

One night around 9 p.m. I found Melony lying on her bed in tears. Through everything, I had never seen Melony cry. I knelt beside her and stroked her hair, I asked what was wrong and she gestured to her chest. Both in our pajamas, we piled into my car and drove out into the night. We found ourselves at the entrance of a hospital to which the google map had directed us. After some broken communication back and forth from myself and the attendant, he communicated to us that she did not have the right insurance to be seen at that hospital. I could hear Melony choking back tears as she stood there in her nightgown and slippers.

When we arrived at the correct hospital only one person could be admitted into the building at a time, as COVID-19 was still prevalent. I gave her my best smile and said “Yo aqui” and pointed to my car, indicating that I would wait for her in my car. She nodded, and disappeared into the fluorescent lighting. An hour and a half later, she reemerged, obviously experiencing relief. She had presented with mastitis, a cripplingly, painful clogging of milk in her breast tissue.

When we arrived back at the shelter around midnight, we found her fragile little son being breastfed by one of the other mothers, who had offered her milk supply to nourish and soothe the child.

Those first two weeks of her recovery, we just existed together. Further solidifying our relationship which had developed into a sister-like bond considering we were about the same age and both very far from our families. We knew we had one another and that we would figure things out together.

Eventually, Melony asked me if I would consider being the godmother of her son. With no hesitation, I agreed. After he was baptized, I got to delight in watching him grow. Melony and I spent seven months together at the center, making coffee for each other, passing her little boy back and forth, and growing and maturing together.

Yesterday I received word that she was granted admittance into the United States through her active asylum case. She was fleeing from El Salvador from the man who had, against her will, impregnated her with the little boy who was now my godson. We spent months praying for her safety. In the seven months that I have worked at the shelter, she will be the first mother to set foot on American soil.

She spent one night at a shelter on the American side of the border, before her mother who lived in Oklahoma purchased her a plane ticket. I picked her up the morning of her flight and we went out for coffee. After a little coaching on how to traverse the airport, I waved goodbye to her from the other side of the security line.

To understand why individuals like Melony and so many others are leaving El Salvidor, it is helpful to look at the countries, history/economics, food security, and drug/gang activity. To assist in understanding the exodus: