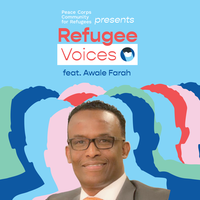 Refugee Stories is a blog series on the Peace Corps Community for Refugees website. The purpose is to allow refugees in the United States the opportunity to share their experiences  and call members of our community to action. If you have a story to share, please email morganking296@gmail.com.

My name is Awale Farah and I am originally from Somalia. I came to the United States in 1984 as a refugee and now live in Kent, Washington with my wife and four children. I have a degree in computer science, and I have worked as an Engineer for companies such as BOEING and AT&T. I became involved with the Peace Corps Community for Refugees through the Refugee Film Festival in June 2020 where I was a panelist.

I grew up idolizing police because my father came up through the ranks to become a general in the Somali National Police Force.

I did not watch the entire video of the murder of George Floyd because I was afraid, in my rage, I would start breaking things. The killer was wearing a badge and police uniform. He was posing for the camera as if to say, “Look I can do this and get away with it.” This is the opposite of everything I learned from my father growing up. The police in Somalia protected and guarded members of our community. They did not abuse them.

I came to the United States as a young man who happens to be Black. I quickly learned that being a Black man in the United States often means I am guilty until I prove my innocence. I try  to project my innocence by speaking softly,  keeping my distance from people (especially older white people), by smiling and making light of conversations, by keeping quiet when I need to speak up, and by keeping hands visible to the police officer when I get pulled over.

In 1996, our whole family moved to the west coast of Seattle. Since my father had been a Police Officer in Somalia, I thought he would be a good community liaison with the Seattle Police Department (SPD). My father was retired, and this would be something he could do while helping bridge the gap between the Somali community and the SPD.

After his first meeting my father stated, “I will not go back to meet SPD or any police department ever again.” My father said during the meeting he was sitting next to a police officer and they started talking about the police training in the United States. My father explained that Somali police officers are trained only to shoot arms and legs or non-vital parts of the body. The Seattle police officer had told my father, “We are trained to shoot center of mass.” Center of mass is a technical term for aiming at a person’s chest cavity.

Last year I ran for Kent City Council, I went door-knocking for my campaign, I dressed in business clothes instead of jeans. When someone opened the door, I would take three steps back so I could make myself seem smaller. I am 5’11 and 190lbs. I could not go to certain areas because, as a Black man, my presence would have alarmed members of the community and put me at risk of the police being called.

I learned during my career that I had to speak softly in meetings because I did not want to be labeled the angry Black man if I spoke passionately on a subject. I felt I had to lower my chair, speak less, and let go of many things because it was not worth fighting.

I have had conversations with my children (two boys and two girls) and said that if they want to get anywhere, they have to work twice as hard as their white classmates. I have seen it during school and at work in my own life. I have told my children if they ever get pulled over by the police that they need to be respectful, they cannot talk back, and they must keep their hands in view at all times. My wife and I worry constantly and pray to God we never get the phone call late at night. All parents, but especially Black parents, dread that their child has been shot.

It is ironic that we escaped from a country torn apart by civil war - a place where armed militias shot people - arbitrarily to the United States where we thought we would be safe. But we are not. In reality, as the George Floyd murder demonstrated, the people who are supposed to protect and serve all citizens are a threat to people like me and my family, simply because we are Black in this country.

However, the beauty of the United States is that it is always working to be a more perfect union. I did not want to share my experience at first, but I asked myself: how can I help this union be more perfect if I do not talk about the very things that need fixing?