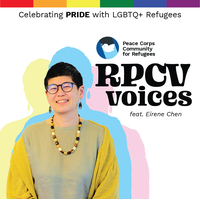 In the United States, and in many countries where Peace Corps Volunteers serve, the month of June is honored, as Pride Month, when millions of people across the world come together to honor, celebrate and support lesbian, gay, transgender, bisexual, intersex and queer (LGBTQ+) individuals and communities.

From the June 1969 uprising at New York City’s Stonewall Inn to today, Pride Month reminds us of the tremendous advances that have been achieved in the US over the past decades, including through the legalization of marriage equality, the repeal of the ban on trans people serving in the military, and the expansion of birthright US citizenship to children born to same-sex couples living outside the US. The global community of former and current Peace Corps Volunteers and staff includes many LGBTQ+ people who also work with many LGBTIQ+ people in their countries of service.

Yet the struggle for full equality, equity and acceptance for LGBTQ+ people is far from over, especially for trans, non-binary and disabled minorities. Even today, being LGBTQ+ is still criminalized in nearly 70 countries and is punishable by death in 6 countries. And addressing discrimination and inequalities through an intersectional lens still remains a relatively new concept in many global humanitarian and development spaces.

Among LGBTQ+ people who are forcibly displaced, transgender refugees, asylum seekers, internally displaced and stateless people face particular challenges. Trans people are often more easily identified compared to other sexual and gender minorities, and they are more exposed to discrimination, marginalization, stigmatization, arbitrary arrest, and all forms of violence. Many experience distress, intense pain and often lack hope while living in asylum countries that have deep-rooted transphobic attitudes within their host populations and institutions, in particular within their governments and their police forces.

This is why the work of LGBTQ+ and allies by the Peace Corps Community for Refugees community is so essential. Each year, the US Refugee Admission Program welcomes LGBTQ+ refugees to the United States, refugees who have been granted international protection specifically due to persecution that they have experienced because of their sexual orientation, gender identity, gender expression and/or non-conforming sex characteristics. For this Pride Month blog, we invite you to meet one of them:

Nath Niyitegeka (he/him) is a trans man, disability rights and LGBTIQ+ rights activist and a former refugee from Rwanda who was resettled to Lansing, Michigan in 2019. He had left his home country of Rwanda in 2010 due to transphobic persecution, including detention and torture, which resulted in his physical disability and mental injury. Life in Uganda as a transgender asylum seeker was very difficult, as many countries in the region continue to criminalize consensual same-sex relations and do not adequately protect LGBTQ+ people from hate crimes. Despite holding a bachelor’s degree in social sciences, Nath found that obtaining even informal work was challenging. After 4 years without any valid documents to prove that he was seeking asylum, Nath was attacked by police officers and experienced gender-based violence. In 9 years, Nath lived in 5 different places, moving frequently for his own safety.

Only 2 months after the Orlando shooting at Pulse Nightclub in 2016, Uganda Pride was holding its own celebration at a club in Kampala. Over 200 LGBTIQ+ people, including refugees from neighboring countries, were in attendance when the Ugandan Police shut down the Pride celebration, detained and arrested the attendees. Following that evening in August 2016, Nath established a community-based organization in Uganda called the Rainbow Heritage Initiative (RHI), whose mission is to help LGBTIQ+ forcibly displaced people to speak up, raise their voices, articulate their grief, and verbalize their issues.

After Nath and his partner were resettled to the United States in 2019, Nath has continued to advocate for LGBTQ+ refugees and asylum seekers both in the US, in East and Central Africa, and globally. In his new home of Lansing, Michigan, Nath has been very active at the St Vincent Catholic Charities. While maintaining a full-time job in a different field, Nath also serves as an interpreter and translator for Lansing’s Refugee Development Center, through which he supports LGBTQ+ resettled refugees from Cameroon, Senegal, the Ivory Coast, Rwanda and the Democratic Republic of Congo. Nath is a member of the Healing Circle and All are Welcome Lansing, two groups that support LGBTIQ+ new comers and former refugees from different parts of the world. Nath has also been nominated as a candidate to represent Michigan as a member of the Refugee Congress.

Rainbow Heritage Initiative is a registered youth support organisation in Uganda, and most its members are transgender or intersex refugees and asylum seekers. Due to the security situation and heightened sensitivity around LGBTQ+ topics, RHI members do not maintain an Internet or social media presence but are willing to share information about their members and programs upon request.

RHI’s work very discreetly to advocate, build awareness, fight against sexual and gender-based violence, promote access to inclusive health services and sustainable livelihoods opportunities, as well as to provide emergency food support. Some of these services are for all LGBTQ+ displaced people, and some specifically target transgender and intersex refugees and asylum seekers, as they have specific needs. RHI has a home office where its members meet monthly to share experiences, exchange information and provide support to one another. RHI members participate in all organizational programs and decision-making.

While collaborating with the UNHCR and international NGOs such as HIAS, several Rainbow Heritage Initiative members have been resettled in the United States, Canada, and Sweden. Since February 2018, RHI has also advocated for members from Burundi and Rwanda to be granted refugee status, and it recently opened a branch in the Kyaka II Refugee settlement in western Uganda for LGBTQ+ asylum seekers and refugees living there.

As a small LGBTQ+ refugee-led organization operating in one of the world’s most challenging asylum environments for LGBTQ+ people, Rainbow Heritage Initiative is not eligible for grants that are available to larger NGOs and is grateful for external support. For this year’s Pride Month, please consider showing support for RHI – all interested are welcome to contact Nath directly, at nathninziza20@gmail.com.